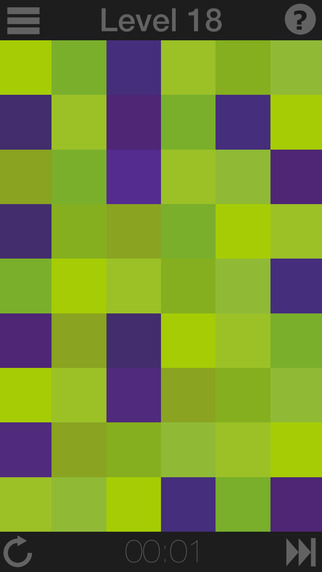 Artemiy Galkin is the author of Boopee. No idea why that is the title. Each cell has an on/off mode. The object is to  turn all the cells on.


Level 1 is simple: tap all the squares, and they change individually.  Other levels get tougher. On level 6, tap a square and it will turn itself on and then another, either to the right or down. Interestingly, if you tap on the same cell, it will then turn on/off it's next orthogonal neighbor, in a clockwise direction.


Level 7, the rules are different: tap a cell and it turns itself on/off and then 1 cell in the diagonal up/right direction and 2 cells in the down/left direction.


There are approximately 60 levels and I've done just 6. Boopee has borrowed from the Lights Out concept and made something interesting. But I'm not feeling the magic.
https://itunes.apple.com/ru/app/boopee/id956832224?l=en&mt=8

Update: This game appears to be a clone of Furiosity: https://itunes.apple.com/us/app/furiosity/id726216954?ls=1&mt=8
I have not played that. It was made by Bart Bonte.

Posted by Tom Cutrofello at 9:29 PM