SpreadSet from Chen Xue was a surprise for me.  Look at the 2nd image. The object is to Spread a ribbon from the 16 square to cover all the squares.  Yawn.

Posted by Tom Cutrofello at 8:18 AM 4 comments:

Description from the App Store:
TIKADAK is a puzzle game aligning the tiles with diagonal lines on them.
3 opportunities to rotate the puzzle is given, and you win the game if you make all the diagonal lines become positioned in specific direction within 3 times.
The rule is simple and easy, and you can enjoy the easy puzzles that anyone could enjoy and challenging puzzles that only the gifted players could play.
Of course, you can use hints that may help you in times of difficulty.
Rotate the tiles of Tikadak and rotate your brain as well!

There are so many great puzzle apps out there.  This one is crushing them all.
Posted by Tom Cutrofello at 2:53 PM No comments:

The object in Tile Chain is to slide the tiles to their respective goals.  Important: all the tiles must always be connected.

There's a  little sokoban feel to this game, but not quite. You can fiddle around and maybe solve some levels. Eventually, you'll have to bear down and plan.

I always save the best game for Friday.
Posted by Tom Cutrofello at 2:22 PM No comments: 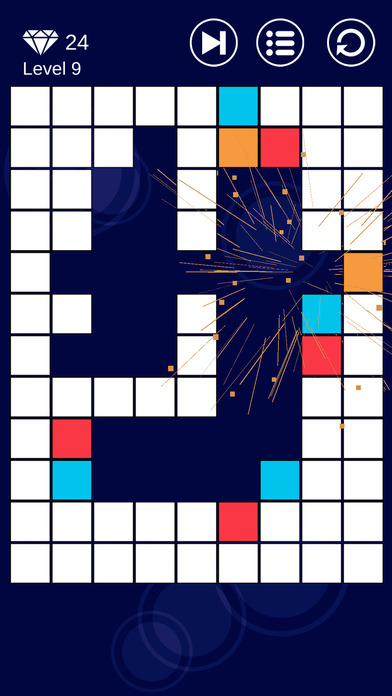 Look at the 2nd image.  The blue piece on the right only travels up and down.  The other blue travels left/right.  The orange at the top moves horizontally while the one at the bottom moves vertically.

These puzzles are trickier than I thought they'd be.  There are only 28 levels, which I really like, and at the moment I'm stuck on 12.

Regarding the graphics: generally fine. But I'd like there to be some markings that signify which direction a piece can travel.  It's not always obvious.

Posted by Tom Cutrofello at 2:21 PM No comments:

From the App Store


RULES:1. Find all of the Blue squares such that all of the totals match the clues.2. The clues are on the right and across the bottom and are the totals for the respective rows and columns.3. The numbers across the top and on the left are the values for each of the squares.E.g. The first square in a row or column is worth 1, the second 2, the third 3, and so on.Marking a square in Blue will add that square's value to both the row's total and the column's total.


This game is really easy. Perfect for young puzzlers. I did 30 puzzles in about 20 minutes.
The icon for the game shows a 6x6 grid. But all of the puzzles are 4x4.
https://itunes.apple.com/us/app/kakurasu-sudoku-like-japanese/id1137780328?mt=8
Posted by Tom Cutrofello at 8:14 AM No comments:

Ladybug Pathfinder comes from Yutaka Onizuka. It's a topology puzzle app game where the object is to place the Ladybug on any node and then trace a path that covers every  line once.

We've seen dozens of these types of puzzles. However, this is the first one that has a 3D perspective.  Also, the graphics are simply terrific.

There are 110 puzzle and I've done 32 of them. I have to stop because these are too easy. Nevertheless, the visuals are, again, wonderful.
https://itunes.apple.com/us/app/ladybug-pathfinder/id1153321498?mt=8
Posted by Tom Cutrofello at 11:20 AM No comments:

Roll the labyrinth ball comes from Ruslan Goncharenko, who's produced a number of puzzle apps.


The game is more like a 'pipe' puzzle where the objective is to rotate individual squares so that the red ball will have a path the silver square. Some squares are bolted in a fixed state.


I solved the first 8 Extreme levels in the 8x8 size. Not so hard.


Roll the labyrinth ball would be good for novice puzzlers.

The game board is a 5x5 grid with numbers 1-5. The object is to change 1 number to form a string of 3 consecutive numbers.

Look at the last image. The instructions: add 1.  Obviously, tap the 2 on the right.

Scoring Points: There is a multiplier that is essential. Your first set will likely yield 3 points. The string disappears and new numbers randomly fall in. If you can find/make a new sequence, you'll get those 3 points times two. After that, times 3. Etc.

According to the game makers, the highest multiplier so far was times 212. Phenomenal!

How is that possible? Pops. These are earned and then used - strategically.


The Leaderboard has 2 categories: Total High Score and Total High Score without Using Pops. I played this game for a week, without even realizing Pops existed. At the moment, I'm #2 in that department.


Treple has a lot going for it: simple to learn, great graphics and interesting concept. If you're careful, one game can take 45 minutes.

Nulla is a solitaire puzzle app game.  The object is to combine adjacent numbered tiles that are the same and whittle down to just 1 tile.

Look at the 2nd image.  Combine the two 11's and they turn into a single 10. In this case move the left 11 over to the right 11 so that the resulting 10 is adjacent to the one that's already on the board.

The puzzles are not hard. However, there's a scoring system. Every correct move counts as 1 point. If you make a mistake, you back to zero.

The graphics and overall presentation are very good.  I recommend this for novice puzzlers and for those who like peg solitaire games. Though it's not quite the same thing.
https://itunes.apple.com/us/app/nulla/id1144199581?mt=8
Posted by Tom Cutrofello at 2:19 PM No comments: Crystalux. New Discovery comes from Dmitriy Vasin. The object is to move the hexagons around to form a closed loop or loops.  I must confess that I almost gave up after doing a few levels because it seemed too easy. However, the patterns formed at the end of each level are quite nice. Think Celtic Knots nice.  The reward at the end: the gems glow. There are 317 levels.  I've done 60 of the Basic Levels and 17 of the Advanced Levels. None of the Expert Levels yet.  I must admit, I'm stuck - for now. Crystallux is not addictive. It's actually the opposite: just plain enjoyable.
https://itunes.apple.com/app/crystalux.-new-discovery/id996508262
https://icecatgames.com/lands/crystalux/index.html
Posted by Tom Cutrofello at 8:55 AM No comments: 
1. There are blocks (the white X squares) and directional lines and curves.
2. Look at the last image. Look at the most middle white square. The right curve is darker: that is the active curve.  After a tile passes over it, it will toggle to the other curve.
3. Non Equal Tiles. A Negative 4 can go to a Positive 1. It will then become Negative 3 and then can change directions.
4. There is an undo button. Obviously, not a big deal, unless you've been playing games that don't have this.
5. The graphics are very good and most importantly, the puzzles are at a perfect level of difficulty. That is: Hard Enough that I get stuck, but easy enough that I'll solve it after 5 tries.

Oggoelement by Olivier Darmon  is a puzzle app game that is similar to Lunar Lockout.


The object is to pair up Your Men by sliding them until they hit an obstacle.  They do not have to crash into each other; they simply need to land adjacent to one another.


1. Some pillars can be tapped out of existence.


2. Directional arrows force the movement to one direction.


3. The art/graphics are very good.


4. There's no undo button, which is annoying. But that's okay because I really like this game.


7. Looking at the Leaderboard - nobody is playing this. Only 12 people have finished the first set of free puzzles. C'mon puzzlers, show some support. This game is free with no ads. When swiping, all the heads travel together.  All the Donalds must get to the skyscraper.

There are 20 levels and they took me about 12 minutes. The puzzles themselves are okay. But the concept is not new and these levels aren't very hard.


If you're going to download & play this game, do it during Sunday night's 2nd presidential debate. Then delete it, because it's not worth keeping. Which may be a reflection of the actual people.
http://www.wisebeetle.net/dumptrump/
https://itunes.apple.com/us/app/dump-trump-game/id1122797165?ls=1&mt=8
Posted by Tom Cutrofello at 12:26 PM No comments: 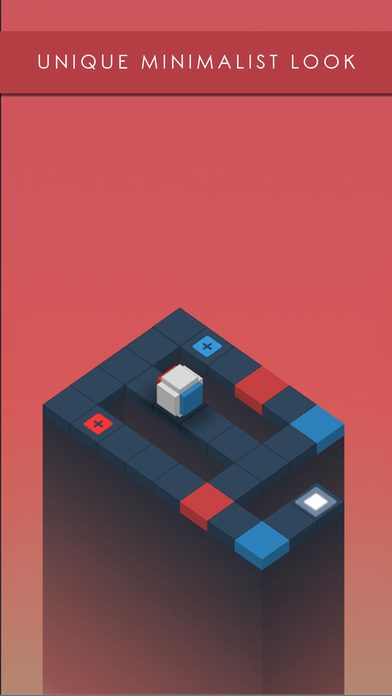 Himanshu Manwani and Goverdhan Gosavi are the brains behind Rubek. Rubek is a Cube Rolling Puzzle most similar to Qvoid - see link below.


The objective: Your Man, the white cube, will pick up red, blue and green faces at the squares with plus signs. Those colored faces allow you to land on certain squares. They also: lift up squares and rotate sections of the grid.


If you're a perfectionist and want to earn 3 stars, you will have to restart some levels to get the minimum number of moves. There is no undo button.

ReflecTs DS is a laser with mirrors puzzle app game. How many laser puzzle apps have I reviewed on this blog? I've lost count.


Look at the first image. The laser is in the middle of the left wall.  The two red squares inside are splitters. This particular level has 3 targets: the 2 squares on top and 1 on the bottom.


There are 50 levels and I've done about 25 of them.  What's interesting: with the splitters, you have to figure out from which direction you need to enter it.
https://itunes.apple.com/us/app/reflects-ds/id1143812488?mt=8

Edges - A Puzzle Challenge is an Edge-Matching Puzzle.  The object is to rotate each square so that all the edges match.


You didn’t think the game was just going to be turning squares… did you?

And more! We’ve got to keep a few cards up our sleeves…


I solved 19 levels. It's certainly colorful and if you've never tackled this genre, give it a try.
http://edgesgame.com/
https://itunes.apple.com/us/app/edges-a-fun-puzzle-challenge/id1124663674?ls=1&mt=8
Posted by Tom Cutrofello at 9:06 AM No comments: