Patchmania - A Puzzle About Bunny Revenge! 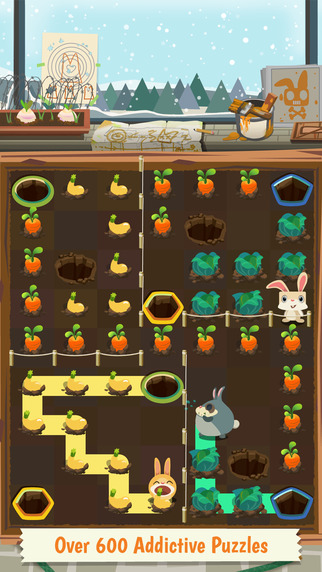 Glen Iba recently contacted me about his company's new puzzle app game Patchmania - A Puzzle About Bunny Revenge! It's a topology puzzle game. The object is to make sure that each critter eats his/her preferred vegetable and then jump back into a safe hole before the farmer comes.

Jon Grall is the real the developer.  It's his indie game company, called Little Details,

Glen is  merely the designer of all the puzzle levels :)   Jon, and most of the team
are located in San Francisco. 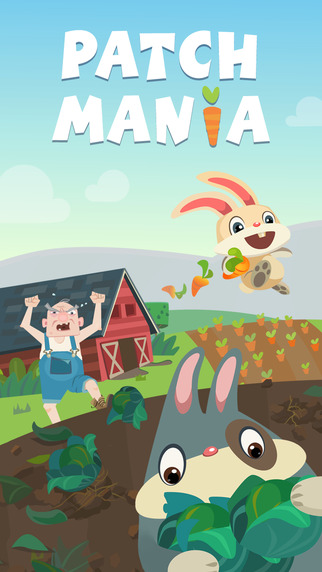 If you go to their webpage you'll see photos of Jon at his local DMV asking bored citizens to play test his game. He was willing to pay them to play & critique.  Love this! (My local DMV is a no-fun zone.)

There are over 600 levels. Many of them are quite simple. So you can jump right in. At the bottom of this section are some of the other topology games I've played over the years. I particularly like this genre & have solved thousands of these. Of the 600 levels in Patchmania, I've solved around 375. I plan to complete all of them.

What's new: having multiple paths/critters. Calvin only eats carrots, while Otto eats just cabbage. Daisy eats the pink stuff. Peanut eats the squash.  Essentially it seems that many levels have multiple puzzles within them. However, mushrooms can be eaten by anybody and when they're mixed in, things get tricky.  Also, because there are multiple holes, it's sometimes tricky to figure out where the starting point and ending point is.


Wormholes:  This is the only time I've seen a topology game that uses multiple wormholes.  There are also fences that restrict movement. (The last time I've seen wormholes in a topology game was  in an app game called InfeCCt. That game came out 6 years ago and I played it, but never posted a review. What can I say, I'm not a perfect puzzle app reporter.)

Very Impressive: over 350,000 people have downloaded this, as evidenced by the leaderboard.

Fun: the graphics are quite cute. When you haven't made a move in a while, Calvin, starts to juggle. When Daisy jumps into the hole, she pirouettes. Otto starts to snooze if he's waiting too long.

Bottom Line:  Patchmania has plenty of tough puzzles that I struggle with. Unquestionably, it's a strong contender for a PAGY award. (Puzzle App Game of the Year honors are awarded December 31 each year.)


There is a 'Terms of Service' page for users. I'm guessing it's in jest. But I'm not sure.
http://www.getpatchmania.com/terms

By the way, I reviewed Glenn Iba's old game Monorail almost 4 years ago!


Update 3/31:According to Glen, the Patchopolis levels are downright devilishly hard. I haven't gotten to them. I've slowed down my pace....they're getting tougher.