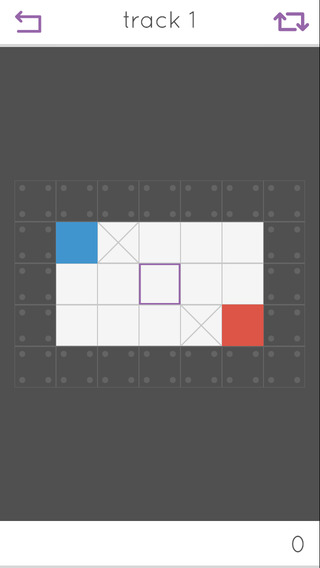 Takafumi Yamamoto has created an interesting puzzle app game called Mergect. I'm assuming the word is a combination of merge and intersect.


Look at the first image. The blue and red squares are dancing around the grid. You must tap some of the white squares to make them black so that hopefully the red & blue squares will merge/intersect in the purple square at the same time.


See the white squares with X's? Those squares cannot be turned black because they are next to a red or blue square. When they pass along further along, the X will disappear.


Look at the second image. You'll notice that the red & yellow squares cannot get to the orange square. You will have to turn the black squares back into white squares.

Look at the third image.  See the white squares with 4 dots? They can never be turned black. The fourth image shows 2 objectives.  The fifth image shows a square with a diagonal. The two colored squares must not merge into that cell.


Bottom Line: I was expecting to dislike Mergect. But I kept playing it. There are 50 levels and I've solved the first 48. I've given up on the last two. Way too hard. In fact, I'm even surprised that I solved some of the other levels!
https://itunes.apple.com/jp/app/mergect/id916090584?mt=8
Posted by Tom Cutrofello at 8:09 AM