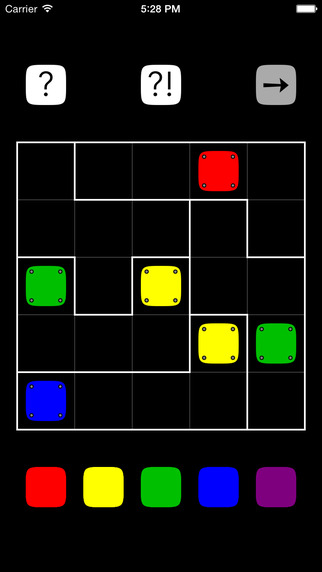 Rudolf De Rooij recently contacted me about his new puzzle app game Quindoku. The object is to place 5 different colored tiles in each column and row and each outlined region.


Look at the region that has the blue & yellow squares.  That yellow square means that the 3 blank squares in that region cannot be yellow. Since that bottom row needs yellow, the only place for it will be the very bottom right.


Quindoku has 'thousands of puzzles'. However, there is no menu to see which ones you've solved & which you have not. The whole interface is very Spartan. But the puzzles are challenging & fun.


Other variations of Sudoku that I've played/reviewed over the years.
Spindoku is totally different, but still very cool.
Hi-Lo Sudoku is one of my favorite variations.
Cryptdoku I played it so long ago, but it's cool.
Stimko Gold - outstanding version of squiggly Sudoku.  Handcrafted puzzles.
Kakooma - interesting for about 3 levels
RollDoku - never even solved 1 level, so hard
Cohabit- played this on my ipod touch - before ipad was invented
FlowDoKu - one of my favorites
Sudoku Mine combines Sudoku with Minesweeper
Sudoku Killer  combines Sudoku with Kakuro
3Doku - a cubic version of Sudoku
Pokergreen Puzzles - a poker version of sudoku