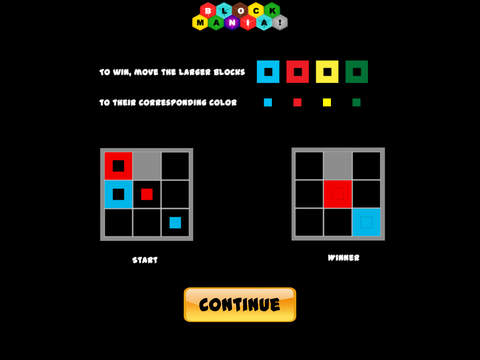 Block Mania! is one of those 'All the Men Travel Together' to get to their respective destinations.  In this case, it's the small colored squares that are fixed. The large colored squares do the traveling.


These puzzles are well designed. I especially like the fact that I can solve these with lots of moves. I'm not a purist; I don't need to solve these using the least number of moves.


Mechanics: When swiping, you must an actual square, not an empty space, which I'd prefer. There's also a slight delay. After swiping the red man down, then the other squares will move down.


Very similar games:
Movez  Came out earlier this year. Pretty much the same as Block Mania but it has 1680 levels. I've solved 592 of them. That's probably enough.
Frozen Ice Cubes came out last year. What's different: there's a point of 'no return'.
Vubu came out 3 years ago. What's different: the vubu men have different powers. Very sophisticated.
Escapology, reviewed by Nicola Salmoria. He told me about this game ages ago. I played it and enjoyed it, but never blogged about it.

Posted by Tom Cutrofello at 8:57 AM