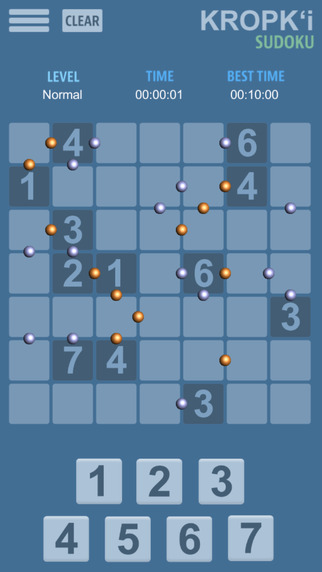 Kropk'i Sudoku really should be named Kropk'i Latin Square. But that's not important. Look at the first image.  See the tiny bronze dots? They signify that the 2 cells will have numbers that are x and 2x.


See the tiny silver dots? They signify that the 2 cells will have numbers x and x + 1.


Look at the second image? You can see that my time for that 'hard' level was just at 2.5 minutes.


This type of Sudoku puzzle with the silver and bronze dots has been done before, but I don't recall the name of the app. I think it's fun. But it's not a keeper for more than a week.
https://itunes.apple.com/us/app/kropki-sudoku/id958231488?mt=8


Spindoku is totally different, but still very cool.
Hi-Lo Sudoku is one of my favorite variations.
Cryptdoku I played it so long ago, but it's cool.
Stimko Gold - outstanding version of squiggly Sudoku.  Handcrafted puzzles.
Kakooma - interesting for about 3 levels
RollDoku - never even solved 1 level, so hard
Cohabit- played this on my ipod touch - before ipad was invented
FlowDoKu - one of my favorites
Sudoku Mine combines Sudoku with Minesweeper
Sudoku Killer  combines Sudoku with Kakuro
3Doku - a cubic version of Sudoku
Pokergreen Puzzles - a poker version of Sudoku

Posted by Tom Cutrofello at 8:24 AM