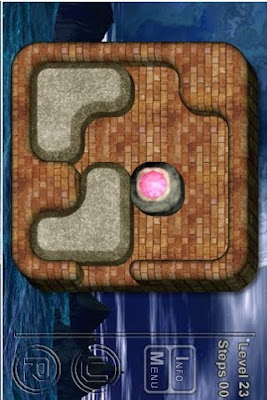 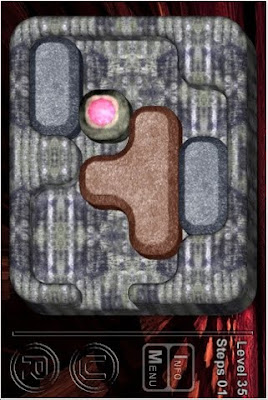 My puzzle friend from Israel Boaz Feldman designed Spinin with Alex Polonsky. Even the easy levels are difficult! Get it!
Posted by Tom Cutrofello at 1:10 PM No comments:

We have long said that Oskar van Deventer is the smartest man on the planet. And now, Oskar shows his sentimentality....
Posted by Tom Cutrofello at 12:15 PM No comments: 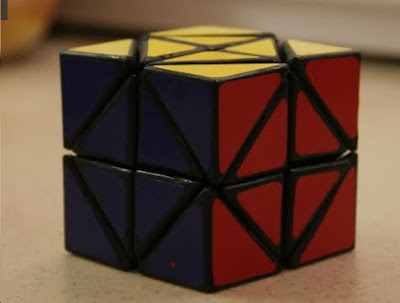 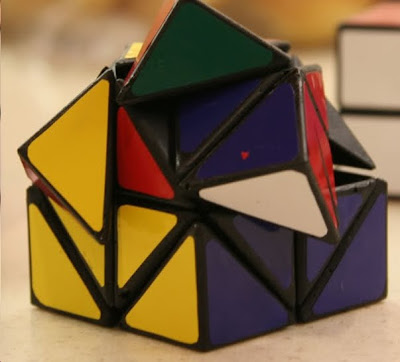 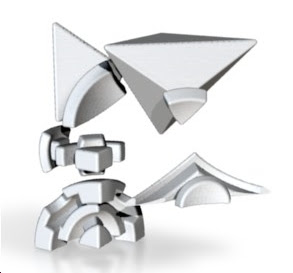 Spent a fun hour taking apart the Helcopter Cube by Adam Cowan. The image above shows the component pieces. The puzzle can be jumbled - meaning it can keep turning in various directions with the shape not being a cube. Without jumbling it - extremely difficult. I tested about 10 algorithms......no easy solution!
Posted by Tom Cutrofello at 9:52 PM No comments: 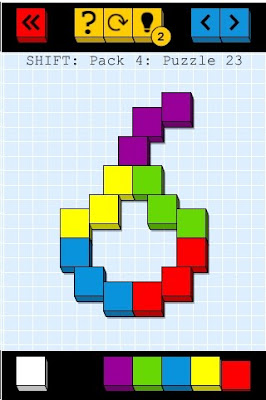 The Grabarchuk family keeps churning out interesting puzzles. icut is the latest. Download it NOW, while it's free.

http://grabarchukpuzzles.com/
Posted by Tom Cutrofello at 10:25 AM No comments:

Martin Gardner was a great puzzler. He wrote a column for Scientific American for many years about recreational mathematics. This Mechanical Puzzle Correspondent spent many hours on the following problem:

Five sailors are shipwrecked on a desert island. They quickly determine
that the only other inhabitant of the island is a monkey and that the only
food is coconuts. They set about collecting as many coconuts as they can
and put them all in a pile. By nightfall they are too tired to divide the
harvest; so they agree to go to sleep and divvy up the coconuts the next
morning.
During the night one sailor awakens, suspicious that the others might try
to cheat him, and desides to take his portion then and there and not wait
until morning. He divides the coconuts into five piles and finds there is
one coconut left over, which he gives to the monkey. He hides one of the
five piles, then puts the rest of the nuts together and returns to sleep.
About an hour later a second sailor awakens with the same suspicions and
does the same thing: He divides the coconuts into five piles, leaving one
extra, which he gives to the monkey. Then he hides what he thinks is his
share and goes back to sleep.
One after another the rest of the sailors do the same: they each take one
fifth of the coconuts in the pile (after giving the extra one to the monkey)
and then return to sleep.
When the sailors awaren the next morning they all notice the coconut pile
is much smaller than it was the night before, but since each man is as guilty
as the others, no one says anything. They divide the coconuts (for the sixth
time) and again there is one left for the monkey.

The question is: How many coconuts were in the original pile?
Posted by Tom Cutrofello at 8:17 AM 4 comments:

Locke must die! Who will kill him? Logically, it should be Jack. Recall: Jack pulled the trigger on him after Locke killed Naomi. But the gun had no bullets.

But our inside sources reveal.......it will be Walt who will kill Locke. Recall: everybody was playing golf. Walt wanders off & sees Locke throwing knives into a tree. Walt asks 'Can you teach me that?'
Posted by Tom Cutrofello at 8:47 AM No comments: 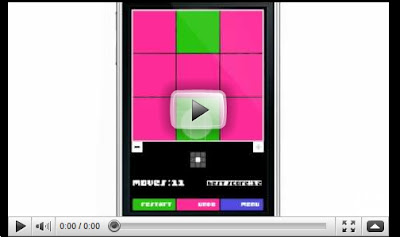 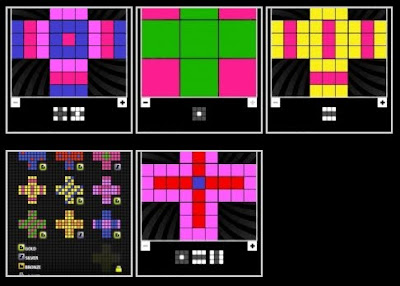 Dan Norcott is the brains behind Axis. Hard to describe. It's brand new. This Mechanical Puzzle Correspondent played the 1st 8 levels. They get hard!
Posted by Tom Cutrofello at 3:52 PM 1 comment: 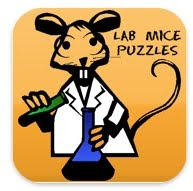 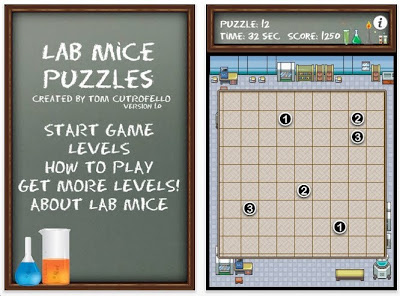 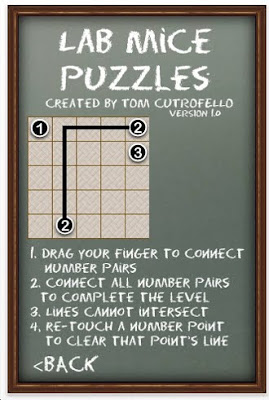 Please download the free version and give it an honest rating. Written responses will help make improvements for future versions. Thanks! 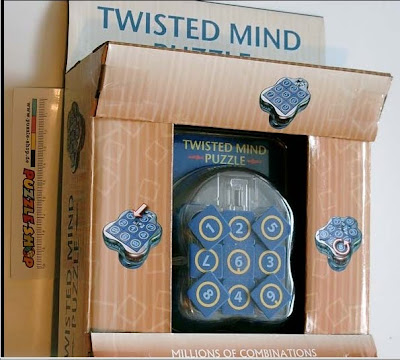 Finally got my copy of this great sliding tile puzzle. The knob in the back lifts the 4 corner pieces and rotates them in place. Solved in about 30 minutes - but do not fully grasp the nuances of this puzzle. Designed by Dave Nesis
http://www.elogiq.com/
Posted by Tom Cutrofello at 12:40 PM 1 comment:

Throughout the series, we see various characters eat an Apollo Candy Bar.

In the hatch, we see Kate, Hurley & Locke all eat them. Ben is offered one when he was young. Jacob gave one to Jack - after his got stuck in the machine. In the most recent episode, Jack offers one to Claire - she declines.

Theory: those who eat the candy bar will have the same fate - and opposite fate as those who did not eat it.

Sidenote: Toys R Us sells Wonka Bars. Maybe we'll be able to be a Lostie & indulge.

Sidenote: Reggie Bars were named after Reggie Jackson and were given away at Yankee stadium.
Posted by Tom Cutrofello at 6:27 PM No comments: 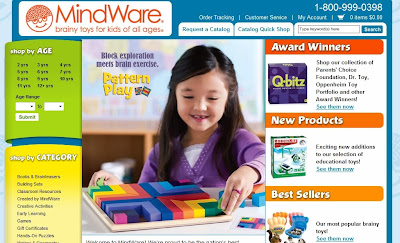 So many people have emailed me about puzzle companies. Yes, ThinkFun & Bits and Pieces are terrific. But don't forget Mindware! Seriously good products that are fun!
Posted by Tom Cutrofello at 10:28 AM No comments: