It's almost impossible to keep up with the 100 new puzzle apps that get released each week. Below is a simple list: the best, most fun puzzle apps that I played in 2011. Most of these were brand new in 2011. Some came out earlier. What distinguishes a Best Puzzle App from Honorable Mention Puzzle App? I like them all, but the Best Puzzle Apps are the ones I've spent a lot of time on!

This list is composed of very good puzzle apps. Perhaps they didn't make it to the Best Puzzle Apps list because I didn't spend enough time on them to recognize the genius behind it. Without a doubt, they are all worthy of your consideration! 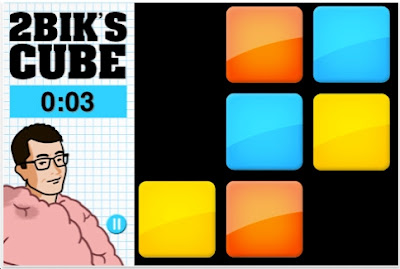 My first thought: ugh, another sliding tile puzzle. However, this one is different. Entire rows or columns shift only where the gap is. Align the colors by columns. Harder than I thought!

Check out the image of the guy wearing a brain vest. Reminds me of the french restaurant in mid-town that offered calf's brain as an entree. We decided to get Thai instead. 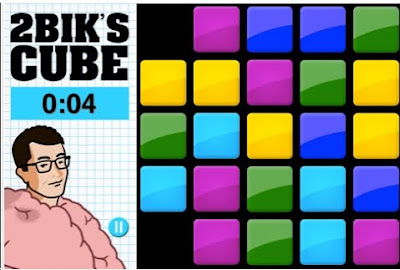 Posted by Tom Cutrofello at 10:00 AM No comments: 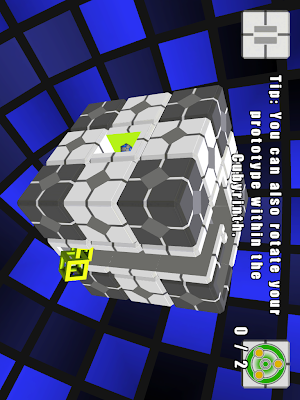 Cubyrinth is a series of maze puzzles. Object: get the green ball to its home. To do this, move the middle layers right/left and up/down to align the path. You may have the right piece in the right place....but it might not be oriented correctly.

There are 28 levels. I have done about 9 of them. This puzzle is similar to Cubetastic. Those users should definitely download Cubyrinth. 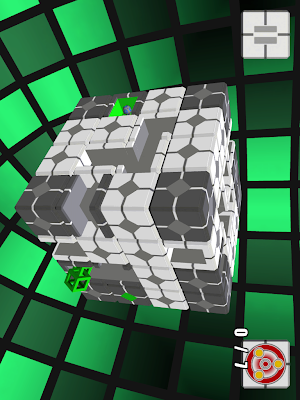 Christoph Grossegger from Austria is the author. http://www.dust-bit-games.com
Posted by Tom Cutrofello at 9:28 AM No comments: 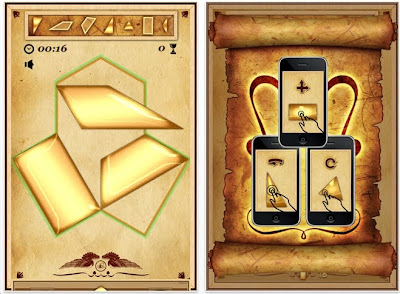 Sphinx is a free puzzle app. The goal: assemble the pieces into each of the outlines. Pieces can be flipped & rotated. Not my cup of tea. But I've never been a huge fan of these types of puzzles. 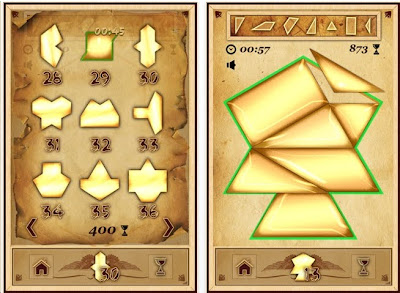 Posted by Tom Cutrofello at 11:04 AM No comments: 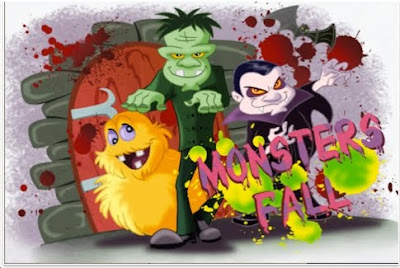 Monsters Fall right now has 20 levels. A very nice change from the puzzles that have so many puzzle levels that it's almost impossible to finish. The first 5 or 6 levels are really 'learn the rules' type levels - very simple. Then they get challenging. 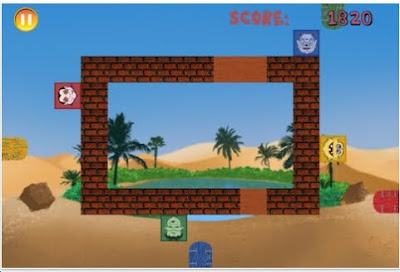 I have solved all 20 levels. It took about an hour. I should mention that some levels have wormholes. In this case, they are depicted as telephone booths. Quaint!

Nikos Detsikas contacted me about his new app and informed me that more levels will come out. I look forward to solving them. 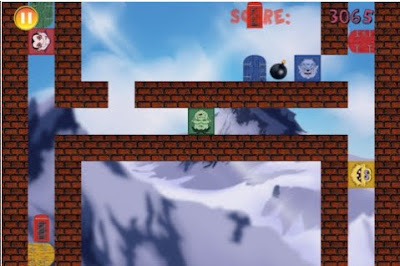 Posted by Tom Cutrofello at 10:38 AM No comments: 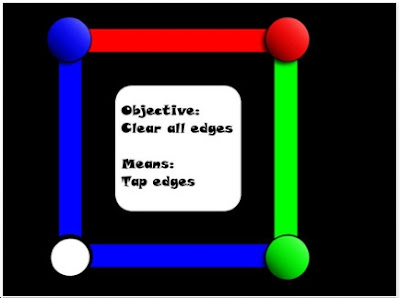 tJam looks a lot like one of the greatest puzzle apps of all time: Subway Shuffle.
It is not a rip-off.

Cars may travel on roads of their own color. When that happens, the color gets erased. Any car can travel on a white road - then that road becomes that car's color.

Object: get all the roads to be white.

This is one fabulous puzzle app. A likely candidate for the upcoming Best Puzzle Apps of 2011 List. 199 levels. At this moment, I have solved the first 45 levels.

99 cents for many hours of addiction and frustration. Bravo to Ivan Vassilev 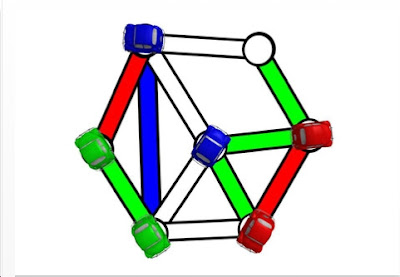 Posted by Tom Cutrofello at 10:13 AM No comments: 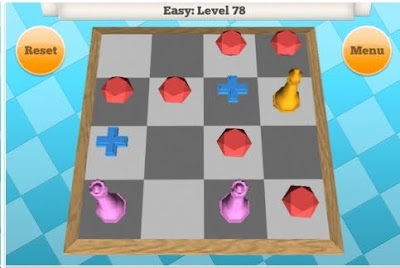 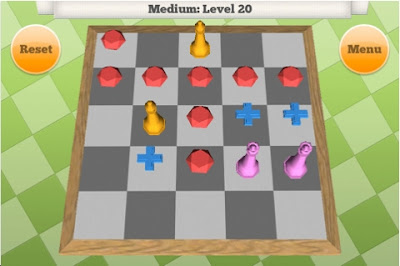 Ruby Capture is a terrific chess puzzle app. Object: capture all the rubys by moving each chess piece once. If a chess piece crosses over or lands on a blue plus sign, it gets an additional move. 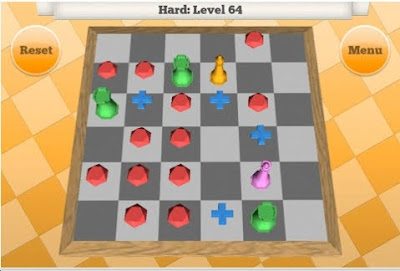 The puzzle has 100 Easy, 100 Medium, 100 Hard and 100 Very Hard levels. I solved all 100 easy levels. Then I moved on to the Very Hard Levels and solved 25 of them.
Without a doubt, Ruby Capture is fun and addictive! The Very Hard puzzles were not as hard as I thought they'd be. Still, this is a fine set of puzzles. Young chess players should definitely play these. 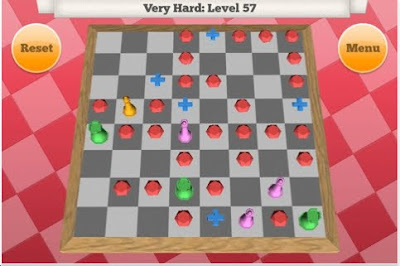 Posted by Tom Cutrofello at 10:23 AM No comments: 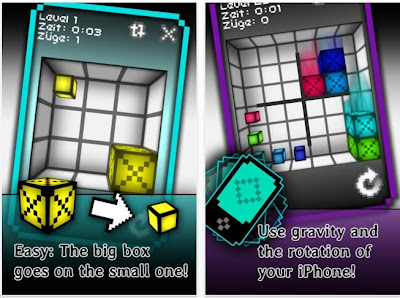 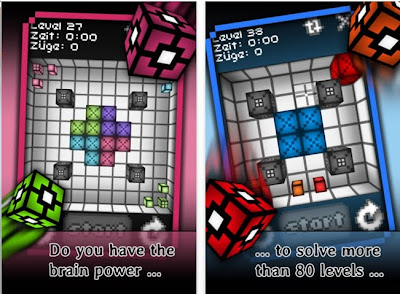 Tumblox is a a tilt maze puzzle. The object is to get the colored boxes onto their matching colored targets.

We have seen numerous tilt maze puzzles. Tumblox is extremely well done. For one thing, instead of swiping left/right or up/down, the user manipulates the arrows and the entire board will shift 90 degrees. This is a very cool feature. 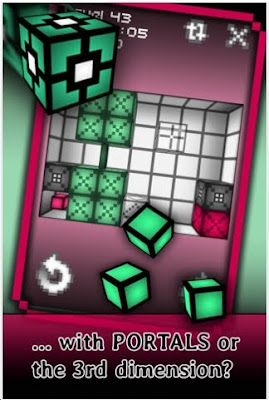 At a certain point, the levels go from a 2-dimensional grid to 3 dimensions.

I'm working on the first annual 'best puzzle apps of the year'. There were several thousand new puzzle apps in 2011.

Next week I will post the list. Stay tuned.
Posted by Tom Cutrofello at 9:26 AM No comments:

Mark your calendars: The annual New York Puzzle Party Symposium will take place Saturday 2/11/12. Contact me for more details.
Posted by Tom Cutrofello at 9:31 AM No comments:

A gift for the puzzle collector in your family 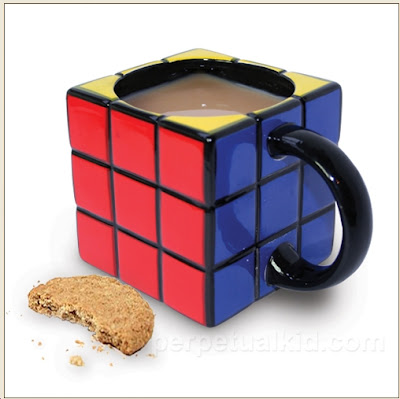 http://www.giftideasforeveryone.com/
Posted by Tom Cutrofello at 1:27 PM No comments: 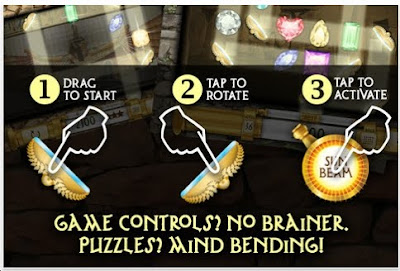 Temples of the Sun is a free iphone ipad puzzle app. Move the mirrors to various points on the grid so that the light beam will bounce off them and through the crystals to score mega points. This is a great fun app - for kids. For the serious puzzler, skip it. 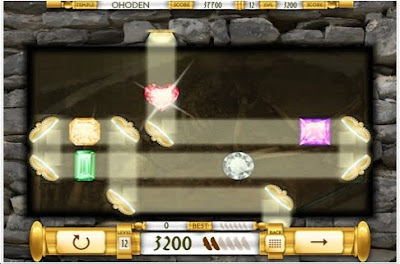 Posted by Tom Cutrofello at 8:31 AM No comments: 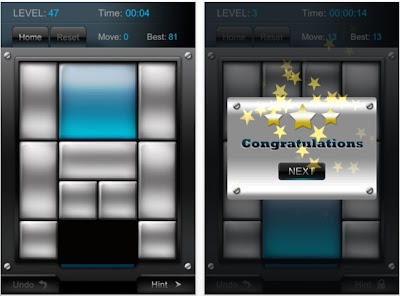 I got my first computer in 1994 - a Gateway. Soon thereafter, I got a CD-ROM of puzzles. One of them was Klotski - which was a lot of fun.

This version iklotski, is a bit boring. All the puzzles have the same grid size. Nevertheless, if you've never done it before, this is a respectable puzzle app. Is it one of the best fun puzzle apps of 2011? Not really. But hey, you may disagree
Posted by Tom Cutrofello at 8:14 AM No comments: 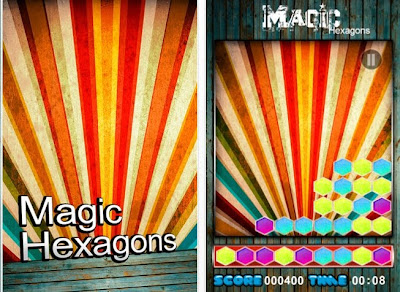 Magic Hexagons is an interesting point scoring puzzle activity. Tap on 3 or more hexagons of the same color if they are grouped together. At the bottom, the next level will emerge onto the bottom of your grid.

After playing for about 28 minutes, I finally cleared the board completely, before the next level popped up. Nothing happened! It just kept going.

The presentation is nice, and I must admit, it was fun. Is this one of the best puzzle apps of 2011? I don't think so. Still, I played it for 28 minutes!
Posted by Tom Cutrofello at 8:13 AM No comments: 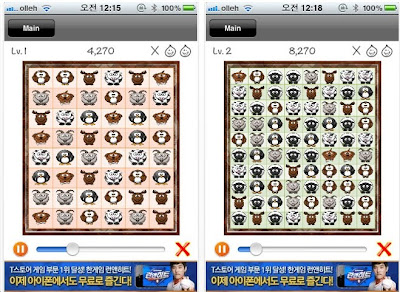 Zoo Block is a point scoring puzzle. Switch 2 neighboring pieces so that one of them will line up 2 with matching pieces. Then they score and disappear.

We've seen sooo many types of this puzzle. Not sure the world needs another version. However, the images are cute animals. So hey, maybe this will appeal to kids. Otherwise, skip it.
Posted by Tom Cutrofello at 9:00 AM No comments: 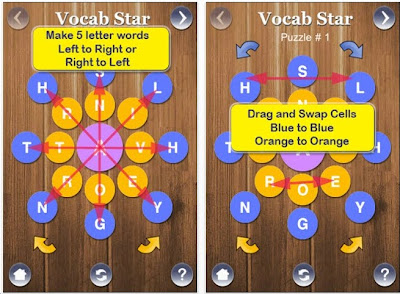 The images describe everything. Try to make 4 5-letter words. Hints are given for the 4 words on a separate page. Letters in the blue circles can swap with each other. Same for the orange circles. There are 150 levels. I've done about 15 of them - including the last few. It's fun, it's free. But I might go crazy doing all of them! 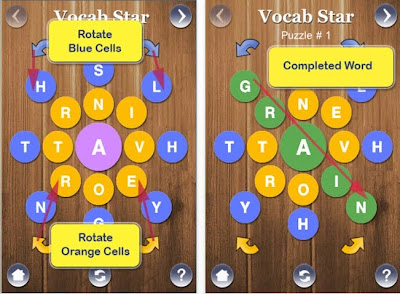 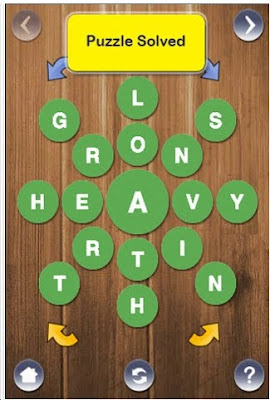 Posted by Tom Cutrofello at 8:32 AM No comments: 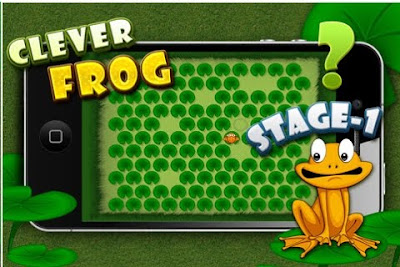 Clever Frog: the object is to prevent the Clever Frog from reaching the perimeter. How to play: you tap on any lily pad to eliminate it. Then the frog will jump to a neighboring lily pad. Try to cut him off!

I've done 2 levels. That's it. It's good. Definitely not for kids. Is this one of the best fun free puzzle apps of 2011? Not really. But it's certainly interesting enough and worth your time to try it out.
Posted by Tom Cutrofello at 12:41 PM No comments: 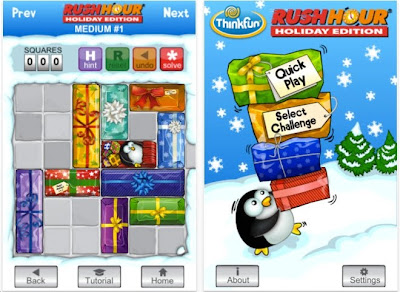 The grid size remains the same.

The 'cars' are now gift-wrapped presents. The Red Car is replaced with a penguin on a sled. 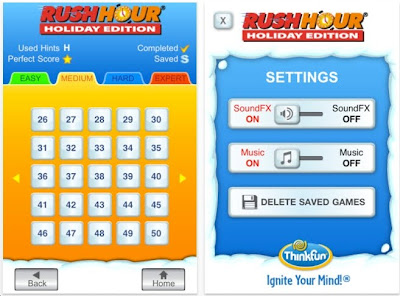 Puzzle-wise, Rush Hour Holiday is exactly what you expect from ThinkFun: the right mixture of puzzle difficulty combined with addictive fun.

The graphics: it's a nice change from the regular cars.

According to Bill Ritchie, the founder of ThinkFun, the original Rush Hour App has been downloaded over 1,500,000 times. Way to go!

Rush Hour was invented by the late Nob Yoshigahara from Japan. I had the good fortune to meet Nob several times at the International Puzzle Partys.
Posted by Tom Cutrofello at 2:48 PM No comments:

http://whatsnext.blogs.cnn.com/2011/11/28/lego-smartphone-robot-solves-rubiks-cube-in-a-flash/?hpt=hp_bn6
Posted by Tom Cutrofello at 12:33 PM No comments: