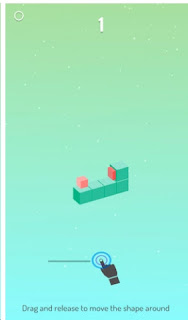 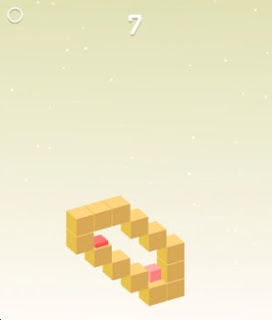 Kubos. comes from Abel Galvan.  It's a 3D maze game.  The orange block will travel until it hits a wall. The puzzle is solved when the red button is hit. 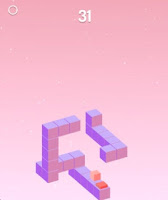 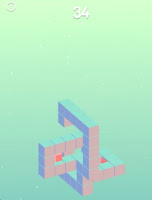 There are 40 free levels and 40 paid ones.  I solved the free levels pretty quickly.  I struggled on level 34 (4th image). 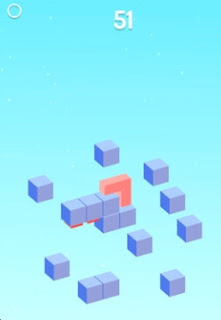 I particularly like the puzzles that have 2 orange blocks and 2 red buttons. 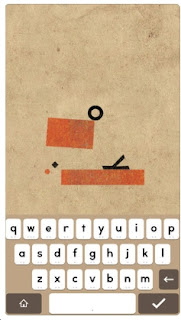 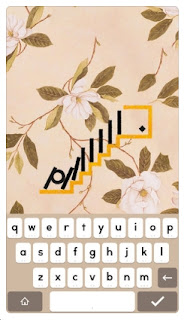 supertype comes from Philipp Stollenmayer. All of Philipp's games are clever physics puzzles with wondrous charm. The object in this game is to type specific letters so that when they fall, they crash into the correct targets. 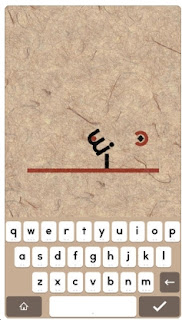 
Some of Philipp's other games
okay?
Zip-Zap
Squaredance

Posted by Tom Cutrofello at 1:13 PM No comments:

Puzzler in the News

https://www.gamesindustry.biz/articles/2018-05-29-syrian-refugee-games-developer-denied-uk-visa-ahead-of-awards-ceremony
Posted by Tom Cutrofello at 1:58 PM No comments: 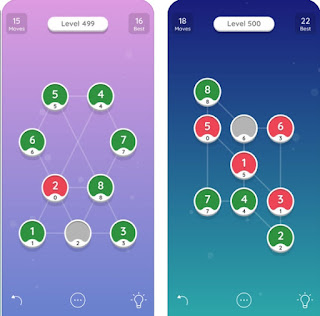 Slide Puzzle. comes from NikSan Tech. The object is to slide the numbers to their correct spot.


Green tiles are good. Red tiles: need to be shunted around. 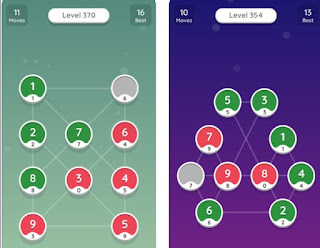 
If you're the type of puzzler who is looking to solve while making the fewest moves, this game is for you.


Relaxing game. If you want more of a challenge, look for Subway Shuffle. 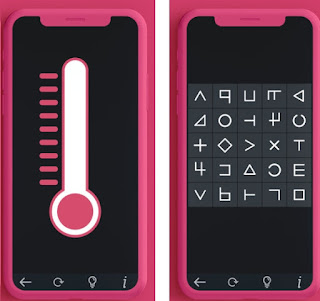 Solve - Decrypt Logic comes from Kyung-Hun Kim. It's one of those games where each level is a completely different puzzle. Can you figure it out. Hints are available. 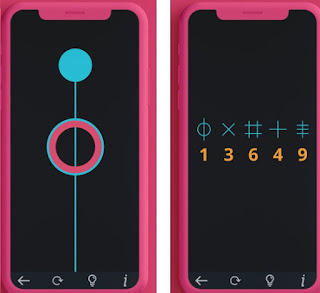 I don't know how many levels there are.  The concept has been done before. Still, it's interesting. 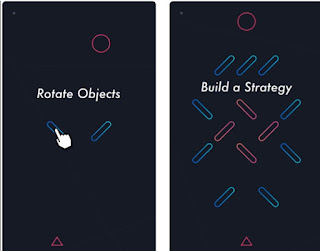 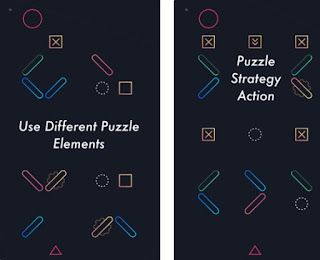 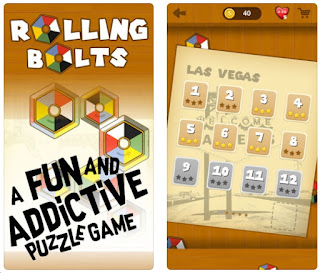 Rolling Bolts - Logic Puzzles  comes from LÖVLUND INNOVATION AB. It's a gear puzzle where the object is to rotate the sections to match the rims. 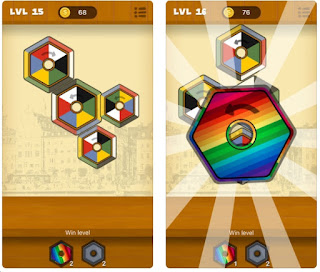 1. All the gears are connected.
2. Each gear can rotate in either direction. A key element to solve is changing the direction in between moves.
3. The fewer moves, the more stars to accumulate.
4. The big gears move once per move.  The smaller gears move two steps for each move.
5. The smallest gears move 5 spaces. In essence, they're really just moving 1 space, but in the opposite direction.


I like this game.  However, there are ads. Also, I had accumulated a certain number of stars to open the next section.....and mysteriously, my stars were gone and I had to start over again. Another problem: you have to swipe across a gear to make it change direction. Unfortunately, when doing so, you might actually tap it and make a move. This happens more on the tiny gears.


I like the concept. The graphics are okay.  But it's not clicking with me. 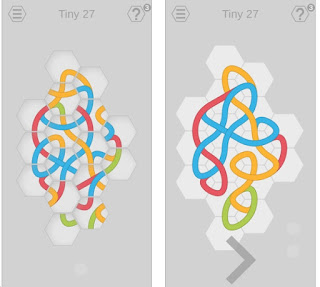 Hexa Knot comes from Michal Gorny.  The object is to swap tiles so that all the edges match and various loops are formed. 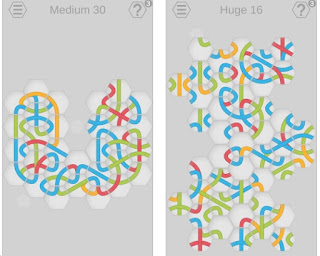 There are 500 levels broken into grid sizes of Tiny, Small, Medium, Large, and Huge.


I've been cruising through the Tiny levels. Fast and fun.  The Small levels are not that small!
I've also done a few of the 'Huge'.
Hexa Knot is very relaxing. 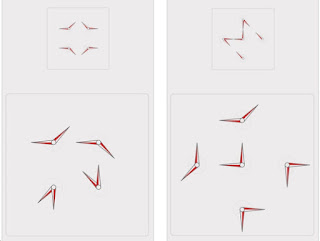 turn, comes from Adem KAYIRCI. I like this puzzle developer.  See links to his other games below.  The object in this game is to get the arrows to match the image above. 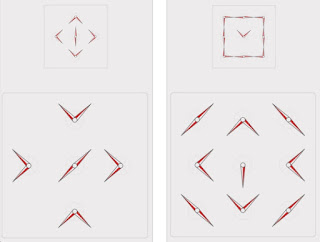 The puzzle is similar to Rubik's Clock where turning one arrow will turn its neighbors in the opposite direction.


There are 3 modes, each with 60 levels. In the first mode: all the elements are straight lines. As a result, there are only 4 positions for each space. I've done 52 levels.


The second mode: each element is an angle that opens and closes. Each element has 8 distinct positions.
https://itunes.apple.com/us/app/turn/id1168647642?mt=8
Posted by Tom Cutrofello at 9:04 AM No comments:

What makes this game particularly interesting is that the elements can be stacked. 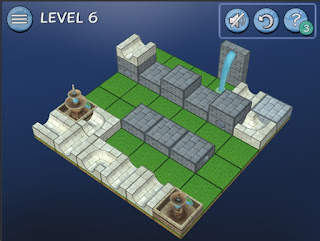 Right above this text is level 6 from the Mix set. Right below is the solution. 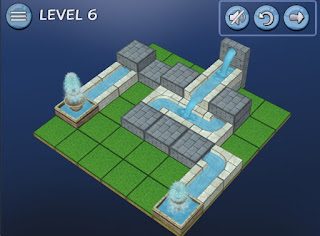 The graphics are great. The hidden pipes in the blocks definitely add a good 'aha' piece. The puzzles are challenging but not overly so. I'm doing the Mix levels now. A few a day. Give it a try.

We've been traveling in the Lone Star State and pulled out of a Walmart to find a storefront called The Great Escape of Corpus Christie.  We were lucky that one of their 3 rooms 'The Heist' was available. 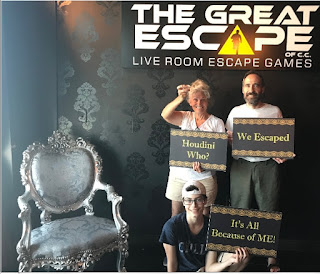 Pierre De La Vie, considered to be “The Stone of Life,” is the most coveted stone in the whole word. The Pierre De La Vie was thought to have been lost for centuries.  The precious stone has finally been found and is now on display in a private collector’s museum. The first team has already gone in and disabled the security system for sixty minutes.  Now it is up to you and your team to go in and finish the job! Will you succeed?


We stole the gem within 60 minutes. Actually, they gave us some bonus minutes because we were so close.


The proprietors have explicitly asked that we not reveal anything.  But, we can say this: it cost $85 for 3 people, which included the promo codes. The puzzles incorporated a wide variety of genres.


The set was decorated superbly.  It felt like being in a movie. The Hot Rock from 1972 comes to mind.
During the game, we were in walkie-talkie mode with the game facilitator who offered us hints if we needed them.  We did!  Afterwards we debriefed and they were a little surprised that we didn't ask for a specific hint. Reason: there was a mechanical puzzle that I knew very well. I think it's in my collection.


The ending had us laughing and we left with big smiles. These folks have 2 more escape rooms and hopefully, we'll do another.


http://thegreatescapeofcc.com/
Posted by Tom Cutrofello at 1:37 PM No comments: 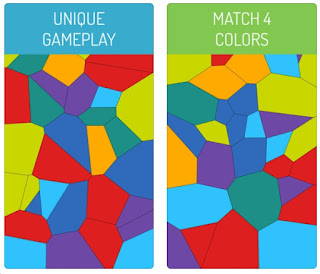 Voro! comes from Abstratum. This is the company that produced Voro - 100% unique and addictive from 2013. The original game is a masterpiece in computer programming and wondrous gameplay. I can't believe I never reviewed it. 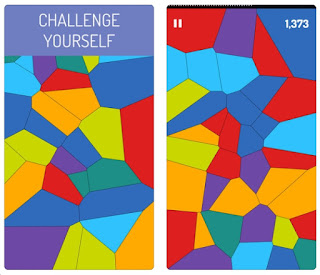 The new game works exactly like the original but points are mysteriously awarded.
Complaint #1: the game does not save your position for another time.
Complaint #2: there's no leaderboard.


Stick to the original. But you'll probably want to down this too. Fantastic graphics. 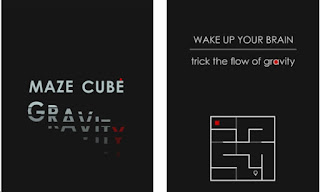 maze cube gravity comes from Adem KAYIRCI. The object is to get the red cube to the target. Each time the maze is tilted clockwise, the gray segments fall all the way down. 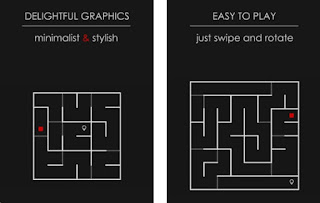 It's not terribly hard. But there's an element that's very important for some levels: once you swipe the red cube on its way, it won't stop until it reaches an intersection or a square region that is bordered by a white line and a gray line. It will stop in a region bordered by 3 white line segments. 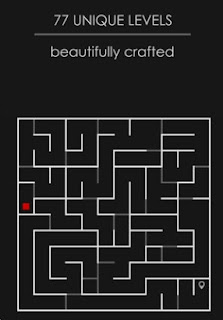 Once you've done 10 levels, you've pretty much done them all.  The other 67 levels are more of the same. The grids get a bit larger. There are some traps to avoid: the 2x2 regions where Your Man will keep rotating in an endless circle.


cohex is another game from Adem which I really liked. I did finally complete all the levels of this too.
Posted by Tom Cutrofello at 9:40 AM No comments: