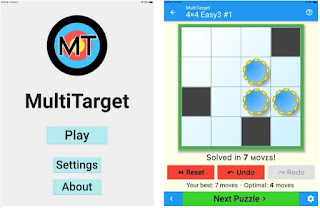 My Puzzle friend Glenn Iba has been a regular attendee of the annual New York Puzzle Party.  The last couple of years, he has shown everybody his progress on making this game.  Finally, it’s published.

The object is to swipe up/down/left/right to get all the balls to the targets at the same time.

There are approximately 350 levels and they get plenty hard.

Yes, some levels have just 2 or 3 balls.  Others have 5 balls. Hard stuff.

This game is free. So go for it. 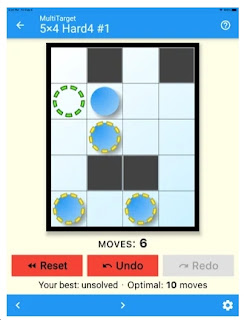 Similar games (this list is incomplete):Movez  Pretty much the same as Block Mania but it has 1680 levels. I've solved 592 of them. That's probably enough.Frozen Ice Cubes  What's different: there's a point of 'no return'.Vubu What's different: the vubu men have different powers. Very sophisticated, very intelligent. Possibly the very best in this genre.Escapology, reviewed by Nicola Salmoria. He told me about this game ages ago. I played it and enjoyed it, but never blogged about it.Block Mania Similar to MovezMove Puzzle - A Funny Strategy Game, Matching Tiles Within Finite Moves

Posted by Tom Cutrofello at 11:43 AM No comments: