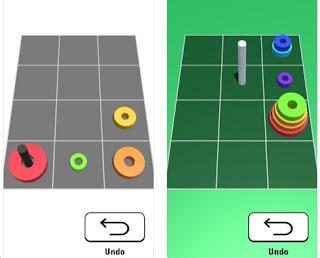 Hanoi Stack comes from Sergii Nagin. Th object is to flip rings and stacks of rings to eventually land on the pole is size order - largest on the bottom. 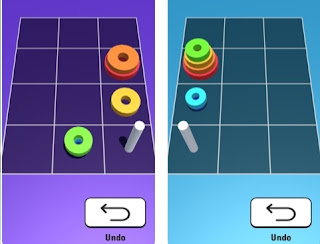 I did the first 25 levels in about 15 minutes.  They start getting interesting around level 50, as more rings are added to the grid.

Interesting:
1. Multiple rings of the same size are frequent.
2. When a stack joins another ring, it will invert completely.  Look at the last image. The green ring on top - that whole stack will flip onto the light blue ring.  That will leave the red, largest ring, on top.
I have no idea how many levels there are.  I've done about 120.  The last 25 took about 20 minutes.
https://apps.apple.com/us/app/hanoi-stack/id1478998981
Posted by Tom Cutrofello at 2:12 PM No comments: 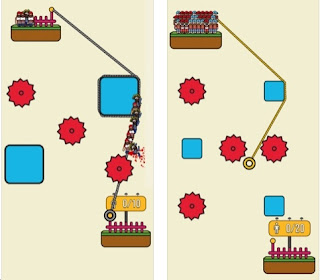 Rope Rescue! - Unique Puzzle comes from Coda Platform Limited.  The object is to get Your People from the top to the bottom safely while avoiding the red wheels and the lasers and various other obstacles. 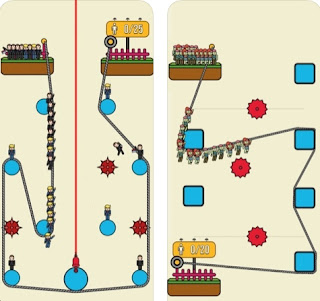 This puzzle play pretty fast. I've solved about 90 levels over 2 days.  No idea how many levels there are.

Important: you must turn off your wifi or you'll be bombarded with ads. 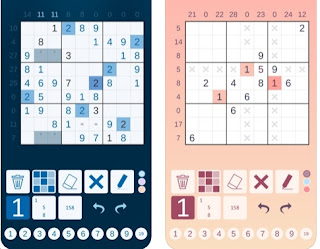 Sandwich Sudoku comes from Nick Carney. This game was popularized in the spring by Alex Bellos via his puzzle column in The Guardian.

It's a standard sudoku with one significant difference: the numbers above the grid, and to the side of the grid, are the sums of the numbers that separate the 1 and the 9 in that column or row.

Puzzlers who have played Killer Sudoku (see link below) and Kakuro should be able to jump right in.

The game has only 40 levels, but that's okay! These games have been taking me a long time to solve.  At the moment I've solved 13 levels totaling about 6 hours of fun.  By that measure, $5 is cheap.

This game is fantastic.

Other Innovative Sudoku Puzzle AppsKropk'i Sudoku  This is really a Latin Square with a couple of innovative ideas. It plays fast.Quindoku Same as Logi5PuzzLogi5Puzz  Same as NumDom. But NumDom has larger grid sizes.Spindoku is totally different, but still very cool.Hi-Lo Sudoku is one of my favorite variations.Cryptdoku I played it so long ago, but it's cool. Long gone from the App Store.Stimko Gold - outstanding version of squiggly Sudoku.  Handcrafted puzzles.Kakooma - interesting for about 3 levelsRollDoku - never even solved 1 level, so hardCohabit- played this on my ipod touch - before ipad was inventedFlowDoKu - one of my favorites. Will not delete this.Sudoku Mine combines Sudoku with MinesweeperSudoku Killer  combines Sudoku with Kakuro. I've spent a lot of time on this one. I can do the easy levels in about 10 minutes.3Doku - a cubic version of SudokuPokergreen Puzzles - a poker version of SudokuStar SudokuSudoku MazeSudoku Spin
Sudoku Sweeper
Joint Number Place
Futoshiki
SudoCubed
Rotadoku
Posted by Tom Cutrofello at 7:00 AM No comments: 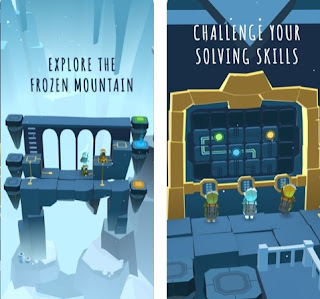 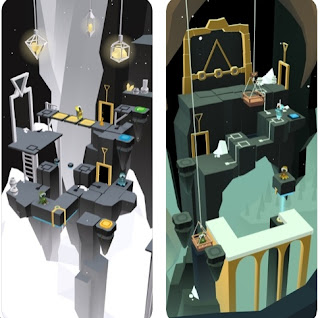 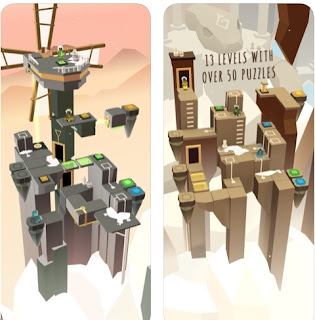 If you like Monument Valley, you'll like Paths of Giants.
https://apps.apple.com/us/app/path-of-giants/id1475781647
Posted by Tom Cutrofello at 12:44 PM No comments: 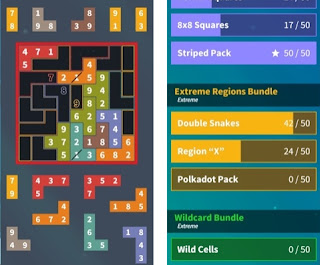 Flow Fit: Sudoku comes from Big Duck Games LLC  The object is to place the numbered pieces into the grid to form a Latin Square. (Technically, this game should be called Flow Fit: Latin Square.) 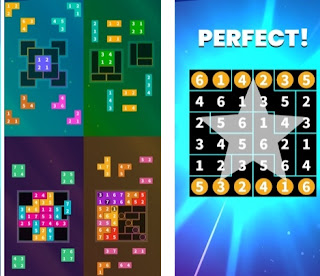 I particularly like the levels that have a question mark on one square.  It means that the value is not the same for both the horizontal and vertical.

This game is strangely addictive.  I think it's because the graphics are so good.https://apps.apple.com/us/app/flow-fit-sudoku/id1475678781
Posted by Tom Cutrofello at 9:00 AM 1 comment:

.Connect. comes from Kishor Berde.  Recently I blogged about Kishor's other game SARKWO. I liked it so much I thought I'd try his other game.

The object is to swap adjacent marbles one at a time until similar colored marbles are all grouped together within a certain # of moves.

The first 20 levels were so easy and I wondered why I was still playing.  But gradually, new elements were being added and things got more interesting.

There are 170 levels and at the moment I've done 87 levels. I did these all on my phone while killing time.

SARKWO comes from Kishor Berde. The object is to slide the colored tiles to get to their targets.

It reminded me at first of an old java game that was a multi-ball maze.  This game goes pretty fast.  And then things get more interesting with wormholes.

The very last level took me a long time. I kept finding my pieces in the same unsolvable situation.

My only regret is that I played this game on my tiny phone.  I would like to see some more levels similar to that last one!

(Hey!  You've probably noticed that I've slowed down my review of puzzle apps these past 2 months.  All is good. I'll try to post more frequently.)
https://apps.apple.com/us/app/sarkwo/id1462867280
Posted by Tom Cutrofello at 10:44 AM No comments: