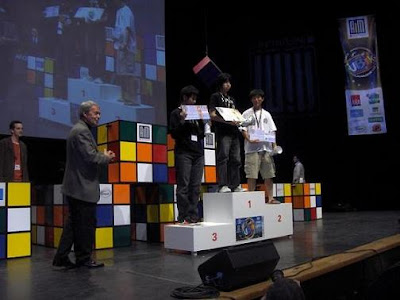 This Mechanical Puzzle Correspondent LOVES Rubik's Cube. However, there are so many championship tournaments which include silly events like solving the cube one-handed. Other events: 2x2, 4x4, 5x5, 6x6, 7x7, Rubik's Clock, Rubik's Magic, Square-1, Pyraminx, Megaminx, and countless others. Some speedcubers have timed themselves using chopsticks.

I attended one of these tournaments in Riverdale, New York (2003?) Nobody was in the audience. Except for the parents of the participants. Boring!

When Roger Bannister cracked the 4-minute mile - that was momentous! But nobody knows (or cares) who holds the current record or what the time is.

Same for Rubik's cube and all the other categories. Having so many categories diminishes the significance of the only one that should count. Organizers of speed cubing events should consider why the general public ignores eating contests.

Nevertheless, this Mechanical puzzle correspondent HIGHLY RESPECTS those who can solve Rubik's Cube blindfolded and those who strive to find the fewest # of moves.

To the Speedcubers: keep doing what you're doing because it's fun. However, please realize that there's a whole world of other puzzles to explore.

http://www.speedcubing.com/
Posted by Tom Cutrofello at 9:41 AM