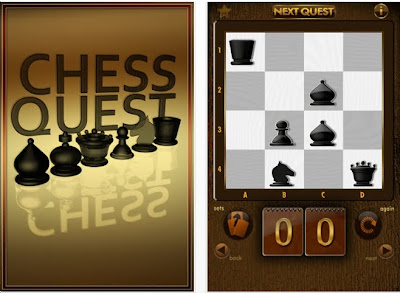 ChessQuest is an interesting series of puzzles. There are about 25 puzzles, which I solved in about 15 minutes. Why am I so good at this? Because of another app called Solitaire Chess which is the exact same thing, but far better.

ChessQuest is a little different in that there is a scoring system. A pawn taking a queen is worth more than a queen taking a pawn. Ignore that part of the game. Go with the Real McCoy: Solitaire Chess, which is one of the best puzzle apps ever. And I'm not saying that because Vesa Timonen is a friend. It really is exceptional.
Posted by Tom Cutrofello at 12:45 PM