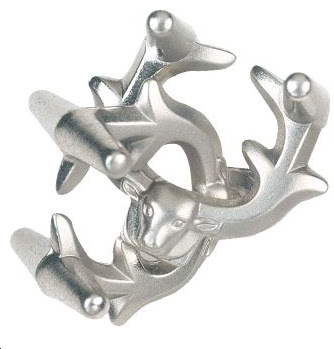 Cast Elk was one of many puzzles designed by Nob Yoshigahara.   The object is to take the 2 antlers apart.

When you solve it, it seems quite simple.  Then try again a week later and it's not easy any more!  Very inexpensive at $13.  Click here for the solution.

I knew Nob casually via the International Puzzle Party. He was quite a character. He performed a magic trick at one of our banquets. The trick involved giant cards placed in envelopes. He never touched anything. In the middle of the trick, he told me how simple the trick was. I don't think anybody figured it out.

Posted by Tom Cutrofello at 7:08 AM