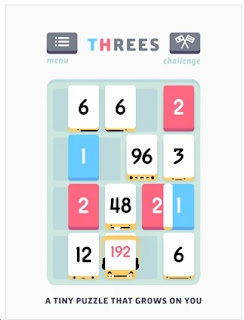 Alan Hazelden recently tweeted about the game Threes! It's now on Apple's 'Arcade'. 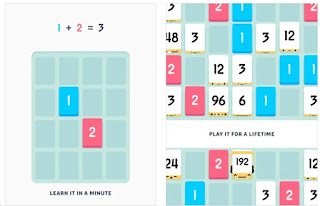 Threes! truly is an exceptional point scoring puzzle app.  It's terribly addictive. Multiple times, I've had to delete it, to get my life back.
After it came out, a slew of clones emerged, almost all of them called 2048.  Many had slightly different rules. But none could match Threes! The graphics were far superior.
When it first came out the rules of Threes! were slightly different. Back then, the next card was either blue, red or a 3 or a 6.  Now, sometimes the next card can be much higher. I believe it can be as high as 1/8th of your highest card on the board.
My review from 2004
Alan's games:
A Good Snowman is Hard to Find.  2015.
Cosmic Express  2018