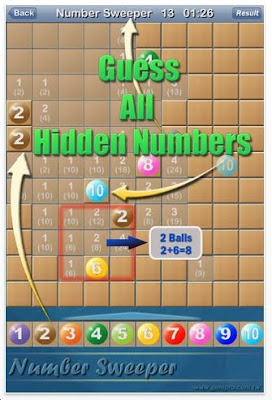 Number Sweeper is very similar to Mine Sweeper. But better.(If you don't know about Mine Sweeper, find out about it.)

The directions posted for the app itself, are not clear. Look at the image above. Look at the cell near the top left corner. Notice it says 1 with (2) underneath. The 1 means that 1 bomb is nearby. The 2 means that the sum of all the bombs near it add up to 2. So, each bomb has a numerical value.

Mine Sweeper has a feature for speeding up the solution; Number Sweeper would be better if it had this feature. Still, Number Sweeper is worthy of your time.