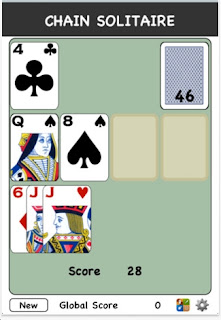 Chain Solitaire is similar to the Uno and Crazy Eights card games. But it's a solitaire version.Try to create a string of cards at the bottom. See the Jack of Hearts? You can place a heart or a Jack on it.  There are 4 columns as holding cells.  The free version only allows 2 holding cells.

Chain Solitaire is a very fast game. I've played it about 15 times. My high score is 368 - on the free version. I'm not sure how many cards that came to though. I've tried to figure out the scoring system - I don't see a pattern. On one game, my first 10 cards gave me a score of 67, while on another game I got 94 for the first 10 cards.

Update: the point value is what each card is. Also, I was able to get all 52 cards using just the 2 holding cells.

Chain Solitaire does not make it onto the list of best puzzle apps of 2012. But it's entertaining.