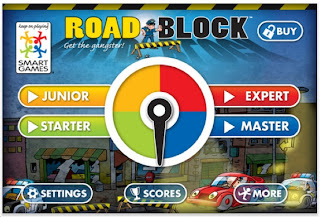 RoadBlock by SmartGames is the official title of this puzzle game app.

The brains behind all of SmartGames puzzles is Raf Peeters. He has designed so many intersting puzzle concepts.

In Roadblock, the object is to fill the board with the given tiles so that the red car can not escape.  When that happens, the police simultaneously get out of their cars to surround the villain.

(I should mention: I was in Los Angeles in the summer of 2000, and I saw a police car chase. I was in a car going one way near the airport and a caravan of police were speeding the other way with a helicopter spotlight on the bad guy. It made the news, but at the time, I thought it just happened everyday in L.A.)

As puzzle apps go, this is very well done and could make the list of Best Puzzle Apps of 2013.

Side note: on December 31, I will publish the list of Best Puzzle Apps of 2013. Stay tuned.
Posted by Tom Cutrofello at 8:11 AM