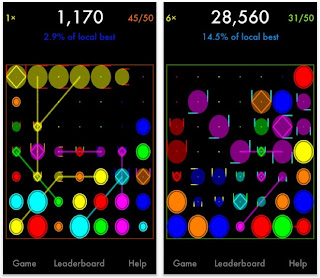 Amir Michail recently contacted me about his new point scoring puzzle app: Chainphoria. The rules/objectives are not stated. They are for you to figure out. Like Vaccine Case and Deadlocked.

Chainphoria seems very similar to DropZap and DropZap 2. If you are fans of those, then I think this is up your alley.

Personally, I'm not a fan of DropZap, but I know lots of folks love them.  Chainphoria is a bit different. After playing it a few times and succeeding - I'm still not sure how or why I succeeded.

I think the graphics are very cool.

7/22/14 update: Amir just contacted me about the rules. Cannot simplify them, so here they are!

The following writeup omits some details but should give you a good idea of how to play Chainphoria. It is a work in progress. Please send feedback to a.michail@me.com

When you destroy (at least) 50 pieces, you will get a bonus based on the number of free slots in the grid after the chain reaction completes, all remaining pieces will be removed, the multiplier will be incremented, a new row will be inserted.

When you destroy (at least) 50 pieces, the multiplier will be incremented after the chain reaction completes but there will be no bonus and no pieces will be taken off the grid before a new row is inserted.

Learn with a Friend

Two heads are better than one! Try any of the single player learn/game modes in a cooperative two player mode!
Posted by Tom Cutrofello at 9:41 AM