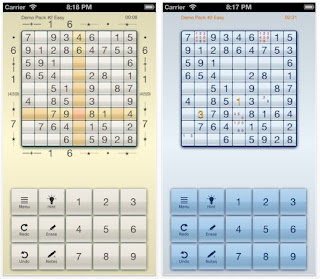 Are you into Sudoku? I first started playing it in 2001, when I attended the International Puzzle Party in Japan. A friend guided me to all of the Nikoli Press puzzle books.  I was hooked.

I have since, pretty much, stopped playing Sudoku - even though there are many terrific versions. My favorite is Squiggly Sudoku.

SudoCross comes from Shaun Patterson. SudoCross is a mixture of Sudoku and Crosswords. Each cell has a clue and the game offers 6 different types of clues when you tap on an empty cell. The clues are: digit, or, range, dot, plus and star.  I could go into explaining how they work, but it would be much faster for you to look it up.

SudoCross is a very serious, sophisticated version of Sudoku. 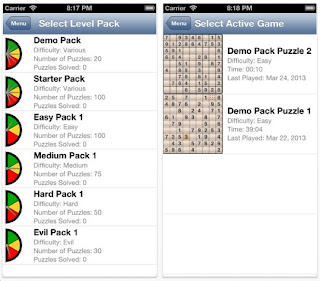