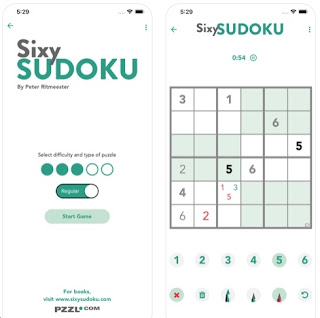 Sixy Sudoku comes from Peter Ritmeester at PZZL.com.  I know what you're thinking: Not another Sudoku variation! 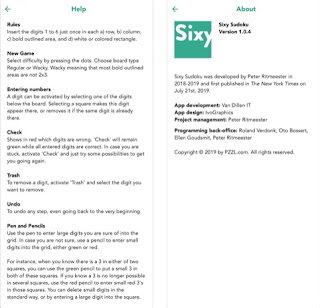 This version has a lot of charm, because the grids are so small.

Also, I really like the element where each shaded region must contain 1-6.

There's a 'wacky' version which is similar to 'jigsaw sudoku' and is also known as 'squiggly sudoku'.

Best of all: each version has difficulty levels ranging from very easy to very hard.

There are 500 levels, but there is no system of checking off which ones you've done.

I've bought 3 of the puzzle books at Peter's website.  I've shared some of the puzzles with my math students.

Update 10/7/2019: Peter informed me that there is an update to the game that includes level progress.