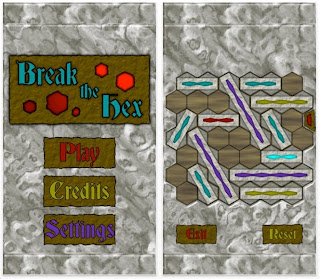 Break the Hex comes from http://www.dogfishapps.com/
If you've played Rush Hour or Unblock Me, then you get the idea. The object is to slide the colored bars along the hexagonal grid so that the red bar can move to the red spot on the right.

We've seen many versions of Rush Hour. We've also seen a hexagonal one too. A couple of years ago I reviewed Hex Slide 1000 and Hex Slide 10,000. Same idea. However, with Hex Slide, the red piece could be anywhere on the grid - not just on the horizontal row.

Break the Hex has 100 levels. I didn't think that I would solve them all, but I did, so it's good. The graphics are fine.
Posted by Tom Cutrofello at 8:25 AM