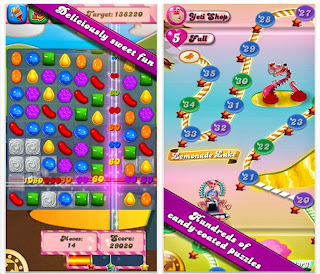 Everybody seems to be playing Candy Crush Saga. When a game is this popular, I'm always skeptical.

Candy Crush Saga is similar to the many versions of Bejeweled. The object is to swap adjacent candies to create a line of 3 similar candies. They drop out, you score points, and new candies drop in.

There are 425 levels. The objective for each level is a little different.

I've played the game for several hours and just completed level 50.  After failing it 5 times, I was locked out and told I could not play for another 30 minutes!  Of course, I could purchase extra lives, extra moves, extra other things that would help.

Candy Crush has become a money-making machine. People spend real money for these upgrades to feed their addiction. You cannot make a one-time purchase that eliminates annoying lockouts.

I'm going to continue to play this game for another 10 levels or so. Because it is a good game.  But there is little genuine variety between the levels. And I suspect something evil: I think that after you fail a level a number of times, the game presents an easy layout of tiles to keep you going.  I'm giving myself a few more days, then will delete this forever.

A much better game that uses a similar, but much more interesting approach is called Go Round. It's also designed to encourage people to buy things. But it's so much better done. And I'm proud that I solved the 100 levels without buying anything.
Posted by Tom Cutrofello at 8:38 AM