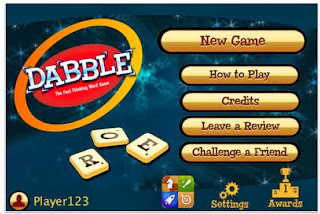 Dabble is a point scoring word puzzle app game that was invented by George Weiss who is 84 and a wall paper hanger. 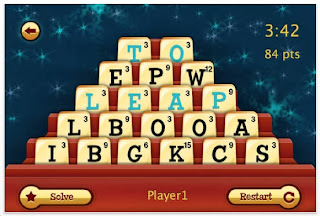 Look at the second image. You must rearrange the tiles to spell a 6-letter word at the bottom, then a 5-letter word, then 4, 3 & 2.  The quicker you do it, the more points you get. 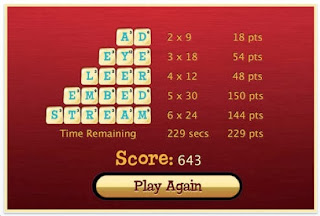 Also, you definitely want to use the higher point letters for the 6 letter word.

My high score is 756. That's not too high compared to the serious word puzzlers out there.

If you like Scrabble, Boggle and Bananagrams, you will love Dabble. My prediction: there will one day be a Dabble tournament where all the players are given the same sets of letters. Everybody will bring their ipad to the tournament hall and will download that day's Dabble Tournament App.

Unquestionably, Dabble is one of the best word puzzle app games of 2013.  The Final List will be revealed December 30th and 31st.