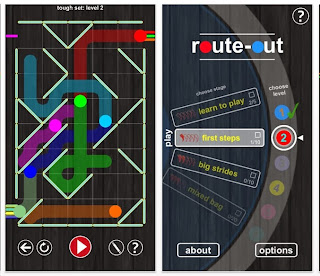 I downloaded Route-Out about a month ago and then forgot about it. It looks like one of the many laser/maze/mirror puzzle app games. 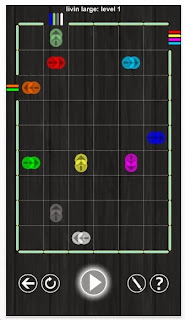 Look at the third image. This is how a level appears. See the blurred images? The red circle is moving to the right. I find this annoying because the arrow clearly indicates which direction it will start when the play button is pushed. Also, this uses up a lot of the battery. Anyway, the object is to place the reflectors on the grid so that each color goes to its predestined exit. 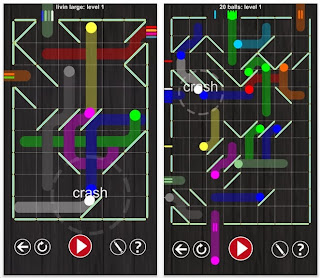 One interesting feature is the ability to draw a path with a virtual pencil.

You may have planned it perfectly, but then when you hit play, 2 balls collide.

Bottom Line: Route-Out is a terrific puzzle game app. And hey, it's free!

Heads-Up: This blog will announce the Best Puzzle App Games of 2013 on December 30 and December 31.

Posted by Tom Cutrofello at 8:25 AM