Even Up: puzzle app game for iphone, ipad 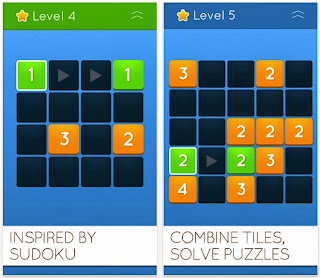 Even Up is a puzzle app game from Kurt Bieg. See the first image - how it's 'Inspired By Sudoku'? It has nothing to do with Sudoku! I would say that Even Up is much closer to Fling and Lunar Lockout. Fling is a terrific puzzle app. Lunar Lockout is a regular puzzle from thinkfun.com. It's also similar to LogiSquares.

This concept is not new. About a year ago I played another puzzle app that was identical called Moskeez.

That's okay.  Even Up has 125 levels.  The puzzles are very well designed. The graphics are perfect and terrific.

The first 25 are 4x4 grids and are beginner. The next 25 have the same grid size and are novice.

Those are followed by 25 Intermediate 5x5 grids, 25 Advanced 6x6 grids and then 25 Expert 7x7 grids.  Many of these puzzles may have more than 1 solution. However sometimes it's hard to tell.  I particularly liked the design of Intermediates 8 & 22. I'm almost certain that those have only 1 solution.

Right now I've solved 101 of the 125 levels.  What's also interesting is that you can create your own levels and then share them. At the moment, sharing is not possible, but you can create them. I think everybody should create their own level - it will help you understand the process of solving.

Heads-Up: This blog will announce the Best Puzzle App Games of 2013 on December 30 and December 31.
Posted by Tom Cutrofello at 8:46 AM