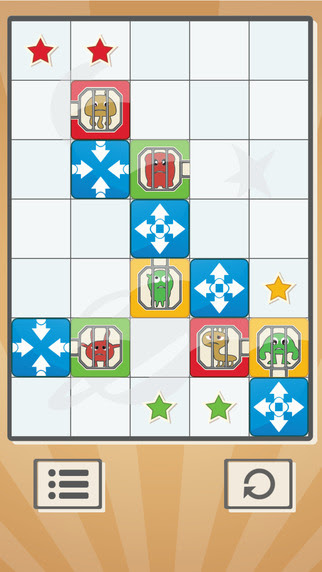 Tiny Aliens Escape comes from Cir Az. The object is to get the red tiles onto the red stars at the same time and in the correct sequence. When that happens, the aliens escape. On harder levels, there are yellow & green tiles & stars.


I've never seen this concept before and it made me want to complete all 60 levels. And I did solve them all. The puzzles are not terribly hard, but that's fine.  A future edition might include wormholes.


Miscellaneous: I especially liked the fact that this game is not counting my moves and awarding me 1, 2 or 3 stars.


Also: when I opened the program with the screen horizontally, the banner ads were stuck in the middle. So only turn it on with your screen vertically.


I like the concept of aliens because they're fun. But there should be some story background. Perhaps the aliens could make a joke when they're free.


These are minor complaints.  Tiny Aliens Escape is free and fun.
https://www.facebook.com/NapaApps
https://itunes.apple.com/us/app/tiny-aliens-escape/id983901107?mt=8
Posted by Tom Cutrofello at 2:08 PM