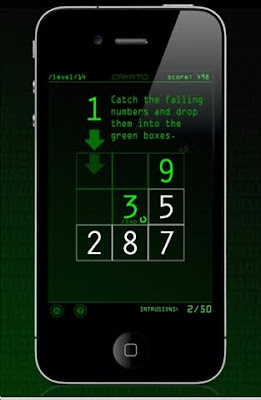 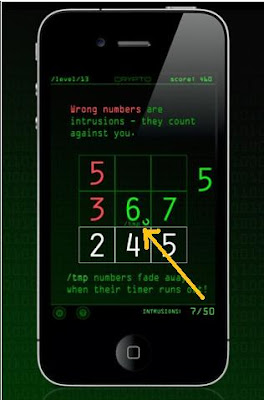 We've seen dozens(maybe a hundred?) of variations of sudoku. Cryptoku is the zaniest. It's a combination of Tetris and Sudoku.

The white numbers are fixed - always the bottom row. As numbers fall, place them anywhere in the grid. If that number turns red, it's wrong. Green is correct. If the number turns orange, then the correct number is either 1 higher or 1 lower.

That's for the basic levels. Harder level: as the numbers fall, they increase in value. Look at the orange arrow. It's pointing to a Temporary number. It will fade away after about 10 seconds.

Kira Hamilton is to thank or blame. Her note to me:

I actually thought up the name "Cryptoku" before I had any idea what the game was going to *do*. I was also inspired by the design on a MacHeist splash page from a few years ago (this one: http://www.lightsphere.com/iphone/cryptoku/MacHeist.jpg). My earliest design notes just say "sudoku meets tetris meets the matrix!" I knew I wanted it to be a falling-numbers sort of game; beyond that I had no idea :) I spent several months just figuring out how it would work. I tried a couple of different options with the boxes on the screen, but ultimately just went with the Sudoku-style grid, and numbers 1-9. The earliest designs actually *added* the numbers when a new number landed on a box that already had a number. But that was just impossibly difficult, even for brainiacs like me :) So now the numbers just replace the ones they land on. I also added in various computer-geek-type "hazards"... /tmp, rotating keys, and viruses are all real things in the computer world. In the game they just have some sneaky effects to confound the player. :) Anyway. Thanks for the review! Hope you enjoy the game. :)
Posted by Tom Cutrofello at 9:22 AM