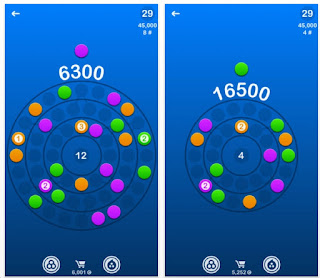 Go Round is a point scoring puzzle app. You must score enough points to move to the next level.

This is a difficult game to describe.  The object is to make groups of 3 on the concentric rings. 3 matching colors on the outer ring will shoot inward to become 1 on the next inner ring.

You can have a chain reaction. But I'm not sure about the exact point scoring system. This much I know: promoting a color from the outermost ring to the innermost will yield a lot of points. I have not figured out the details. Grouping 4 gets more points than 3.

About the scoring system - I contacted the authors about that and the extra things you can use, for example, bombs, when you're stuck, and they responded thusly:

'Yes, I guarantee all 100 levels can be solved without using a single booster, bomb or otherwise.  I have completed all the levels without boosters, and one of our testers completed the entire game with only using a few wildcards in the last dozen or so levels, but no bombs.  It took each of us about 25-30 hours to finish, and involved lots of level replays.

There are several things in the game that affect your points:

1.  Combo moves, where you cause a piece to be promoted through several rings in a single move, are worth a lot of points.  The more rings it moves through at once, the more points you get as a bonus.

2.  A promoted piece accumulates value throughout its lifespan.  If you promote a piece, not only do you get a score for that, the piece also gets a multiplier attached to it, so the next time it is promoted, the resulting score is higher.  This is why the outermost ring is said to contain the most valuable pieces.

3.  The game keeps track of how many pieces weren't removed from a ring, when the ring disappears.  The more pieces you leave behind, the less each move you make after that will be worth.  So if you leave a lot of pieces behind in ring one, it will greatly decrease the score of all your moves after that.  This is to discourage players from simply trying to increase their score by creating matches in the centermost ring, rather than actually trying to solve the round's piece layout.  Essentially, you are rewarded for strategic play, rather than simple color matching.  However, the game is very much designed for you not to try and remove all the pieces from the rings, so definitely do not obsess over leaving a few behind.  It's merely meant as a way to keep people from cheating.  During normal strategic gameplay, it is entirely possible to achieve all the minimum goal scores.

All of the above work together to determine what a particular move is worth.  It's very much based on how you've chosen to play the round, rather than static point values.'

There are 100 levels.  I've done all 100!  But I must confess that I did use my points to buy wildcards from time to time. And some bombs. (Note to National Security Agency: these are not real bombs; they are for a game.) I really like this game and think it has the potential to make the prestigious list of Best Puzzle Apps of 2013. But you'll have to wait until December 31.  Sorry.

Download it! And make sure you budget at least a 5 evenings to complete it.

Posted by Tom Cutrofello at 9:35 AM