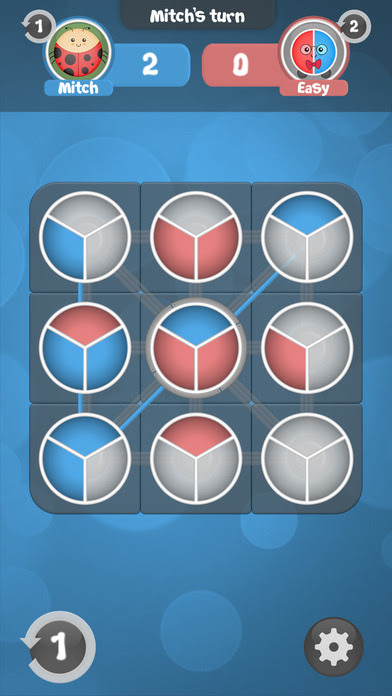 Scott Barker recently contacted me about Happy Portions. It's an abstract strategy game designed by his kids and himself. From their webpage: Twins, Finn and Amelie invented Happy Portions on a restaurant menu while celebrating their 8th birthday. Helped by younger brother Alec, after some later playing about with a whiteboard they perfected gameplay as it now stands. Possibly the youngest game developers in the world.

The game is based on Tic Tac Toe.  Each player will place his color, first choosing a circle, then choosing a sector of that circle.  When all the sectors have been filled in, the winner is the one who has the most 3 in-a-rows.

Interesting:
1. The # of sectors seems to keep growing!  I've played the game with 2, 3 and 4 sectors.
2. Each player has the power to rotate 2 circles per game.  Once a circle is rotated, it's locked in place. This action could subtract an opponents 3 in-a-row and add to their own.
3. You can play against the computer or play against a friend sitting next to you.

There's one thing that could be improved.  After I make a move, the computer makes a move very quickly and I would like to see that animated in some way. Because I'm not sure where the computer made his move.

Happy Portions could be the next Dots & Boxes.  Scott, Finn, Amelie and Alec: this is a very good abstract strategy game. Be proud of yourselves!  Everybody else: it's free, so download it.