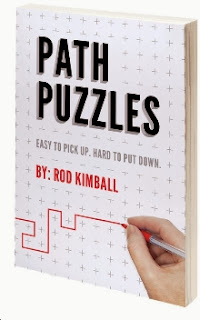 Rod Kimball is a professional juggler with the Flying Karamazov Brothers. (Way back in the 80's, I idolized these guys as awesome jugglers who got to play for a living.)

Besides being a terrific juggler, Rod is an  accomplished musician with the Maestosities. He's the trumpet player. About a year ago, they made a pilot tv show. I threw in some money via kickstarter, got a t-shirt and saw the premiere. It was hysterical! I generally do not watch sit-coms either. 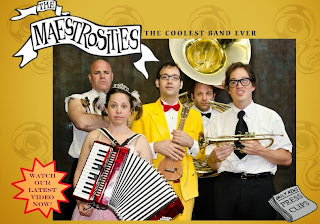 But this post is really about a new genre of pencil puzzles called Path Puzzles.

The object in Path Puzzles is to find a route from the entrance to the exit so that the numbers on the top and sides match the number of squares used in that column or row. 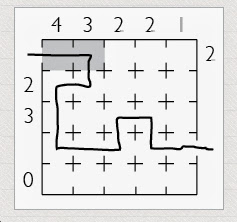 There are some sneaky features like not knowing which spaces are the entrances/exits. 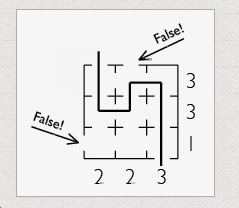 Look at the 8!  It's in the middle and means that the path will cross through 8 of the spaces in that column and row.﻿
﻿ 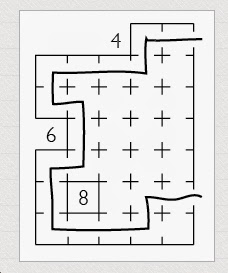 Path Puzzles come in all grid sizes and some funky irregular shapes.  There's a good mixture of easy, medium, & hard puzzles. Most importantly, they're fun.

The final batch of puzzles is encrypted. Which means that each number is replaced with a letter. So it adds a little cryptology to the mix.

$12 is a bargain, considering that it will provide you with a good 15 hours of entertainment. Note: bad movies cost the same and use up only 2 hours of your time.

Buy the book!  Then bring it with you to the New York Puzzle Party Symposium in February and get it autographed. Rod will be there.

New Yorkers: I'll be selling puzzles this Saturday 11/23 at a Fall Festival at the Church of the Heavenly Rest. 2 East 90th st. Right off 5th avenue. 1 block north from the Whitney museum. Come say hi and tell me which puzzle apps you've been playing.
Posted by Tom Cutrofello at 8:10 AM