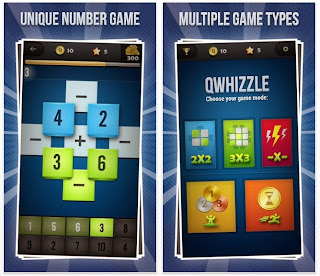 Normally, when I see math puzzles, I'm skeptical.  Qwhizzle is a free puzzle app game similar to the card game 24.

Look at the first image. See the 3 lit up on the bottom? That's your target.  To get it, you must swipe 6-3 in that order.  This is not a 'tap the numbers' action.

Scrutinize the bottom of the first image. You are given 10 targets and a limited amount of time.  The tiles cannot be swiped more than once.

I've spent a couple of hours on Qwhizzle. I am impressed at the level of difficulty, particularly on the 3x3 grids. It's simple math, but the time pressure makes it fun and challenging.

Here's a slight negative: in order to play the 3x3 grids, you must accumulate a certain number of points on the 2x2's. Of course, you can purchase points and stars with real money.

Qwhizzle may be the best math puzzle app game of 2013.

Posted by Tom Cutrofello at 2:16 PM