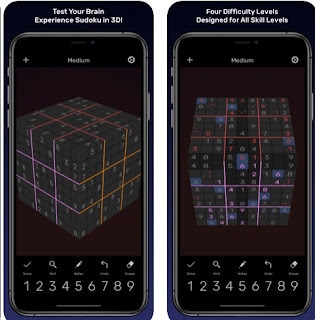 Daniel Greenheck recently contacted me about his game Sudoku Evolved. It's a 3-D version.  Each puzzle has 5 sudokus: front, back, right, left & top.  Important: he edges are shared. Which means all the puzzles are connected. 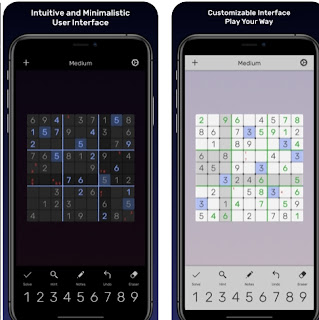 I solved 1 level at 'medium'. I thought it was easy - but still took a while to solve.

The next day I solved 1 level at 'hard'.  This took about 1 - 1.5 hours. I played this game on my small iphone (I have no idea which model it is.). Playing this game was very calming.

The graphics are very polished. A feature I particularly like: tap on, say 3, and all the 3's on that face get highlighted.

Note to Daniel: Good job. Thanks for the promo codes.  Check out the variations below for fun and inspiration.https://apps.apple.com/us/app/sudoku-evolved/id1488161437

Other Sudoku Variations
Sixy Sudoku Small grids - perfect for beginners
Sandwich Sudoku Positively love this. Hard
Kropk'i Sudoku  This is really a Latin Square with a couple of innovative ideas. It plays fast.
Quindoku Same as Logi5PuzzLogi5Puzz  Same as NumDom. But NumDom has larger grid sizes.Spindoku is totally different, but still very cool.Hi-Lo Sudoku is one of my favorite variations.Cryptdoku I played it so long ago, but it's cool. Long gone from the App Store.Stimko Gold - outstanding version of squiggly Sudoku.  Handcrafted puzzles.Kakooma - interesting for about 3 levelsRollDoku - never even solved 1 level, so hardCohabit- played this on my ipod touch - before ipad was inventedFlowDoKu - one of my favorites. Will not delete this.Sudoku Mine combines Sudoku with MinesweeperSudoku Killer  combines Sudoku with Kakuro. I've spent a lot of time on this one. I can do the easy levels in about 10 minutes.3Doku - a cubic version of SudokuPokergreen Puzzles - a poker version of SudokuStar SudokuSudoku MazeSudoku SpinSudoku SweeperJoint Number PlaceFutoshikiSudoCubedRotadoku

Sudoku Octangles
Posted by Tom Cutrofello at 1:30 AM